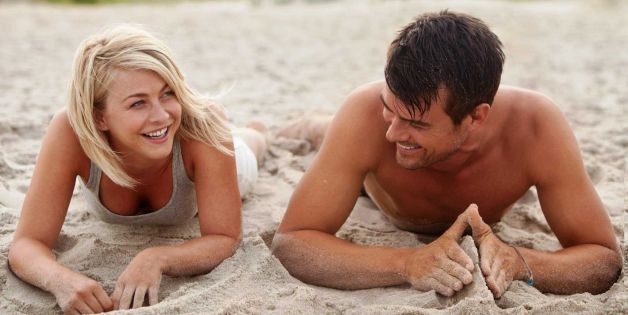 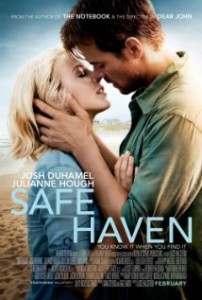 Safe Haven is a romantic drama starring Julianne Hough and Josh Duhamel. Katie (Julianne Hough) is a young woman running away from a dark past when she ends up in Southport, North Carolina and meets Alex (Josh Duhamel), a widower who runs a small grocery store. Usually Southport serves only as a pitstop on the way to bigger cities, bigger destinations. Katie, however, makes the small town pitstop her new home. Captivated by Katie, Alex begins to woo her through random acts of kindness. At first, Katie is reacts aggressively toward kindness, but through the help of her newfound friend, Jo, Katie learns to accept Alex’s advances. Eventually Katie opens up her heart and learns to love Alex despite her own insecurities. Then Katie’s past catches up with her, and Alex struggles between  his desire to love Katie and his instinct to protect his kids.

I would define Safe Haven as an “okay” movie. The plot did not seem to tackle anything new and 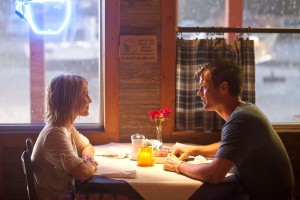 much of the plot was predictable. I did not predict the “twist” ending. In fact, I was rather somewhat put off by the sudden turn of events. I felt as if the plot had not fully committed to bringing about this specific ending. The plot seemed vague and wishy-washy in order to purposefully take the audience off guard with the surprise ending. It’s a personal pet peeve. I’m not a fan of blurred plot lines because they purposefully trick the audience in order to pull off a “magic trick” ending.

The acting was good but seemed forced on occasion, but I feel like this could be said about many romance movies. Sadly, I don’t feel like the characters ever won me over. I didn’t respect or empathize with them. Again, I feel like this lack of connection came through the forced plot line. Don’t get me wrong. The movie had moments of excitement, but overall the movie didn’t speak to me in a significant way. I know that the romance movie genre in general doesn’t attempt to shake its viewer’s world. Still, the viewer should take away something from the movie, and I don’t feel like I took anything away. At all.

Hey,I’m a girl. I enjoy my romance movies. Safe Haven, however, will not make it into my movie collection.I give the film 5/10 stars. I’m not going to write the movie off as worthless, but I probably won’t see it again.