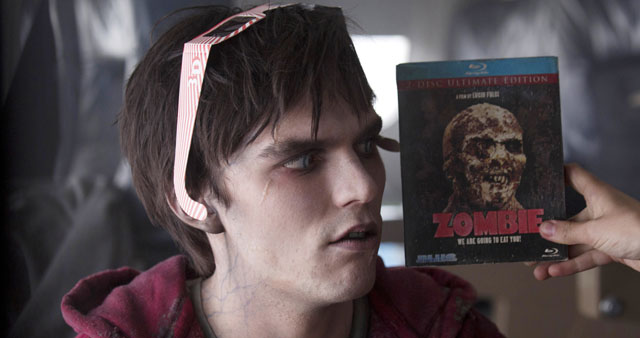 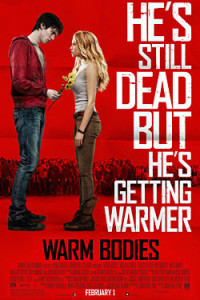 Originally, I did not plan on seeing the film Warm Bodies. However, after continual recommendation from several friends, I decided to see what they were raving about.

Warm Bodies is a romantic comedy-horror movie starring Nicholas Hoult and Teresa Palmer. R (Nicholas Hoult) is a highly unusual zombie. When he saves a human named Julie (Teresa Palmer), he unwittingly sets a series of events into motion which will have ramifications for the entire zombie and human communities. His heart starts beating. Attempting to sort out these new and confusing feelings, R harbors Julie in his home and protects her from the other zombies. As R and Julie spend more time together, R’s humanity grows. These changes inspire Julie to fight against the closed mentality of her survivor family. Love spreads like a cure through the other zombies, and both the zombie and human forces must team up to fight an even greater enemy.

I never thought I’d put the word “adorable” and “zombie movie” in the same sentence, but Warm Bodies was 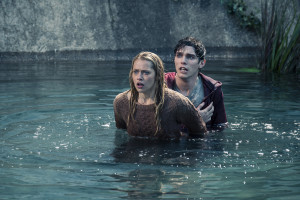 an absolutely adorable zombie movie. The movie is a hilarious satirical comedy on zombie films. The movie is also (if the character names haven’t given it away, I will) based off the classic love story of Romeo and Juliet. R (Romeo) is a zombie, while Julie (Juliet) is a human survivor. In other words, their families don’t exactly see eye to eye. Perry (Paris) is Julie’s boyfriend. Let’s just say R and Perry aren’t exactly best friends. R’s best friend M (Mercutio) doesn’t exactly undertand his friend’s newfound love. In Shakespeare’s story, Mercutio tries to convince Romeo to view love in the simpler terms of sexual appetite. I find this idea ironic because M tries to convince R to view Julie in terms of his actual appetite. Ultimately, Warm Bodies tells the story of two star-crossed lovers who must overcome the prejudices of their families in order to be together. This is an interesting concept especially with the addition of zombies.

The internal monologues R has throughout the film were hilarious. They came from the perspective of a zombie who doesn’t quite fit in with other zombies. R sees the potential beyond his zombie state.  He wants more out of life than brains. Hearing him express these desires and thoughts through monologues was both a witty and creative choice for the writers. I’ll be honest. I’m not a fan of zombie movies, and the more zombie-like aspects of the film disturbed me. For example, zombies eating humans and human brains. Still, the approach was lighthearted and comedic.

I enjoyed the film much more than I expected. While the movie wasn’t at all thought provoking, I found Warm Bodies creative, witty, and humorous. I laughed…a lot. The new approach to both zombies and Romeo and Juliet was definitely interesting. Overall, I’d give the film 6/10 stars. I’m glad I went and watched it, but I’m not planning on adding the movie to my collection and probably won’t watch it again.