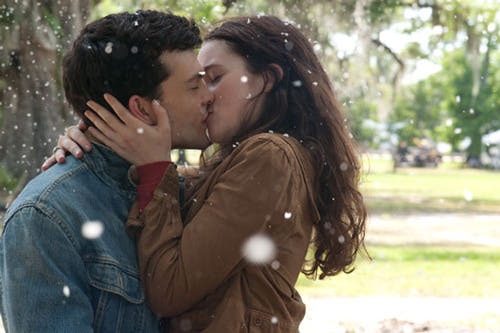 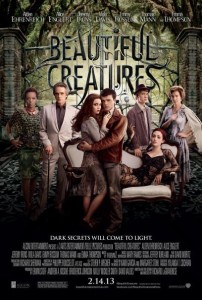 Beautiful Creatures was one of those movies that pulled me in with the trailer. The trailer stayed in my mind for weeks…and weeks. When a trailer plays over and over in my mind, I know I’m a goner. For instance, I saw The Woman in Black because of its trailer, and I absolutely HATE horror movies. The trailer for Beautiful Creatures hooked me. I didn’t have a chance. Once I found the right friends to see it with, I satisfied my curiosity.

Beautiful Creatures is a romantic fantasy drama about a boy named Ethan Wate (Alden Ehrenreich) longing to escape his small Southern town. On the road to freedom, Ethan meets a mysterious girl named Lena Duchannes (Alice Englert) who carries an unpleasant stigma because she is part of the Ravenwood family. The town views the Ravenwoods as Satan worshipers. While the majority of the Gaitlin high school students automatically shun Lena, Ethan is immediately captivated by her. He does everything he can to spark a friendship with her and refuses to go away. Finally, Ethan’s persistance pays off, and the two of them embark on a relationship together. As they grow closer, Lena shares more of her world with Ethan. She is a Caster, an immortal, and she breaks the rules by letting a mortal into the immortal world. When Lena turns sixteen, she will be claimed either for the light or the dark. She is terrified at the idea of the dark claiming her and begs Ethan to avoid her and her family. Ethan refuses to back down because of his love for her. Together, Lena and Ethan uncover darks secrets about their families and their town. Despite certain danger and consequences, the two cling to one another in an attempt to break a curse which looms over the Ravenwood family.

The movie Beautiful Creatures intrigued me. It was not what I expected. The movie features a male rather than female 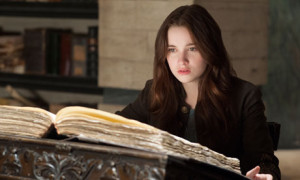 protagonist, but while typical young adult romantic fantasy movies have the male as immortal and the female as mortal, this movie reverses these roles. The male is mortal, and the female is immortal which was an excellent change of pace.

At first glance, the movie seems to possess a Twilight feel; however, this was not the case at all! This movie tackles serious aspects of love, of relationship, and of God which Twilight never came close to addressing. In other words, this movie takes a bite out of serious issues and philosophical concepts such as real love, sacrifice, religion, death, and judgmental views.

The movie speaks to the existence of darkness within every individual and the fear which comes with that darkness. Lena constantly struggles with the darkness inside of her. I love the human quality of her immortality. I empathized with Lena because I understood her struggle and her fear of darkness. I also loved that Ethan was not a sissy mortal boy. He does not back down because of his immortality. Instead, he remains a strong base for Lena to stand on. Despite the craziness which encompasses Lena’s family, he stands by her. The movie speaks of true sacrifice. Lena is forced to choose between her life and Ethan’s life and love. The result is both fascinating and thought provoking. Beautiful Creatures touched on philosophical concepts of God and the role of God in society. The movie showed both the hypocritical “pharisee Christian” and the more down to earth believer. I don’t agree with everything the movie said or expressed about God, but the movie did push my intellectual buttons and made me think about philosophical concepts in new ways.

The balance of seasoned actors, such as Emma Thompson, and unknown actors, such as Alden Ehrenreich and Alice Englert, really made this movie work. The acting was spot on. The actors made excellent and believable acting choices throughout the entire film. The unfolding plot kept me interested for the entire movie. I was constantly watching and constantly thinking.

My friends and I arrived late to the movie and missed the first few minutes. However, I do not think this impacted our opinion of the movie. In my opinion, the movie was well filmed, and each actor did excellent in his or her role. Overall, I give the movie 7/10 stars. I will watch this again when it comes out on DVD in order to absorb more of the ideas presented in the film.

I was incredibly fascinated by the world created in this story and wanted to know more about it. The movie also made me curious about the book series it is based off of, and I will be reading the first book of the series in the near future.

One thought on “God Gives us What we can Handle, Even if we Don’t Believe it Ourselves: My Thoughts on “Beautiful Creatures””