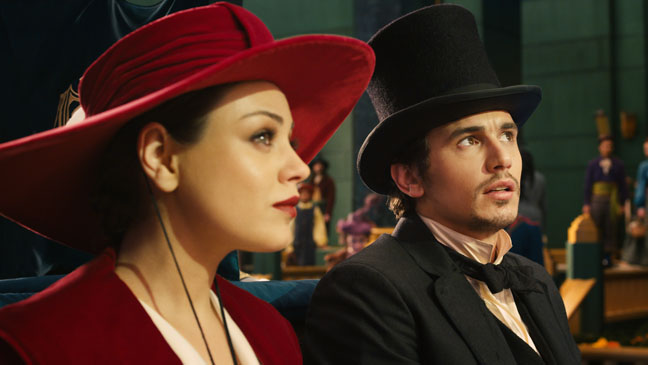 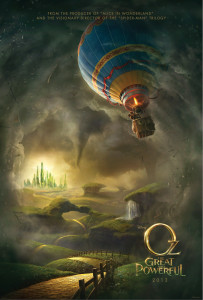 Synopsis: Oz the Great and Powerful is a family fantasy adventure movie starring James Franco, Mila Kunis, Rachel Weisz, and Michelle Williams. Oscar Diggs (James Franco) is an illusionist and con-man from a small town in Kansas. Travelling with a circus, Oscar masquerades as a great and powerful wizard named Oz. He seduces beautiful women and swindles innocent town fok in hopes to make an extra buck. Oscar’s tricks eventually catch up to him, and he is forced to hop into an air balloon to escape. The air balloon is caught in a tornado which carries him to the land of Oz. When his balloon finally lands, Oscar is greeted by a witch named Theadora (Mila Kunis) who tells him he has landed in the land of Oz. Theadora also tells him of the land’s prophecy which speaks of a great wizard bearing the name of the land, who will defeat the wicked witch and bring peace to the land of Oz. Theadora believes Oscar is the great wizard, and Oscar doesn’t correct her mistake. Instead, Oscar uses tricks and illusions to convince the land of Oz that he is the wizard. However, as the game continues, Oscar discovers that killing a wicked witch may not be as easy as he thought.

I’m am rather torn in writing a review of this movie. Unfortunately, I was rather unimpressed of the 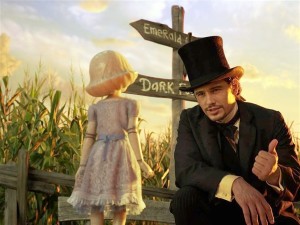 “tricks” and “antics” of Oz the Great and Powerful. I found the movie predictable to the point of boredom and cg-ed to the point of annoyance. However, I did enjoy certain aspects of the movie.

I will start with the pros.

1. Oscar Diggs. I found the humanization of the wizard of Oz brilliant. I love stories which explore deeper into already established characters. The wizard is hardly touched on in many Oz tales. I loved how this movie explored the origins of the wizard named Oz and how he became to wizard of the land of Oz.

2. The parallels between worlds. I loved how the movie paralleled characters between Kansas and Oz. Oscar’s assistant Frank in Kansas becomes the voice of Finley in Oz. A young crippled girl in Kansas is the voice of the little China girl in the land of Oz. The woman who plays Annie, Oscar’s love interest in Kansas, takes up the role of Glinda. These parallels gave the story depth. The parallels also, in a sense, allowed Oscar to redeem himself through Oz.

3. The story. The story was decent–not great, mind you, but decent. In the movie, Oscar has this line about not wanting to be a good man but a great one. You remember that line from the trailer? I feel like the movie shared Oscars’s desire and didn’t want to be a good movie but a great one. Unfortunately, Oz the Great and Powerful had to settle for “good” and not great.

I will end with the cons.

1. Overly CGI-ed. I’m okay with CGI, but the animation in this movie was a bit over the top. When watching the movie, you could tell the effects were intended for 3D. For example, when Oscar is in the basket of the air balloon, he ends up barreling down a river and falling down a waterfall. Clearly, this scene is filmed specifically for three dimensional viewing; other scenes are also filmed this way. Maybe this is a personal problem. I don’t know.

2. Lack of Character Development. There was a lack of character development across the board. Some characters were less developed than others. When the cgi-ed characters win my heart over more than the real life people, we have a problem.

[Number #3 might be considered a spoiler. Read at own risk]

3. Theodora. Talk about lack of character development! Although the movie displays her character showing signs of a quick temper, her character never shows signs of being inherently evil. Theodora does nothing whatsoever to deserve her fate. Her sister Evanora, who is far more evil than Theodora, preys on Theodora’s broken heart and tricks her into becoming the wicked witch. Theodora eats an enchanted apple which will supposedly stop her heart from hurting, and the apple transforms her into a being with no heart. They needed a wicked witch, so they forcefully created one. Justice doesn’t seem to exist in Oz.

4. Oscar Diggs. What can I say? I both loved and hated our wizard. The con man not only wins everybody over but receives a throne on top of everything else? While the heartbroken wicked witch is not only transformed into a hideous beast but receives only a half-hearted “apology” from Oscar in return? I’m all for the con man turning away from his evil ways, but I’m not for the innocent heartbroken girl sealed to a fate of loneliness and despair. Ouch. I mean, really, ouch.

[End of all spoilers]

Overall, I give the movie 5/10 stars. While it was fun to explore the land of Oz, the final result felt flat and even forced. The backstory was interesting enough, but the characters felt undeveloped and without any form of internal conflict. A con man becomes a hero and an innocent becomes the epitome of evil. Not my cup of moral tea.