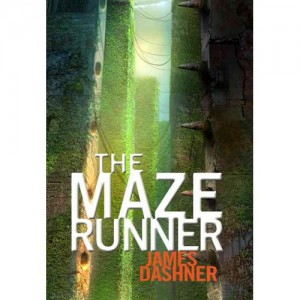 The Maze Runner by James Dashner is the first book in a young adult dystopian science fiction trilogy. The book was recommended to me because of its supposed similarities to the Hunger Games Trilogy. In fact, I was told The Maze Runner was “comparable to the Hunger Games.” As I flipped through the pages of the book, however, this statement proved to be far from truthful.

The book tells the story of a boy named Thomas. He wakes up to find himself in a pitch black elevator with no memories. He only remembers his first name, but he’s also not childlike intellectually. Thomas remembers the workings of the world but not specific memories. For instance, he remembers riding a bike but not how he learned to ride one. When the elevator stops moving, the doors open, and he is lifted into “the Glade.” A group of boys surrounds him. He learns he is not the first one to arrive through the Box. Apparently, a new boy arrives on the same day of every month. Each new arrival experiences the same strange state of amnesia; they remember their first name but nothing else. The Glade is surrounded by walls a hundred feet high. Thomas learns that the area surrounding the Glade is a maze. The boys have been running the Maze for two years and have not been able to find a way out. Every night, the walls of the Maze move, changing the layout of the Maze itself. Every day Runners are sent out to the eight sections of the Maze, and each night the Runners sketch the layout of their assigned section. At night, the only opening out of the Glade closes protecting the boys from various nightmarish creatures who occupy the maze.

Thomas’ arrival changes everything. A girl arrives in the Box the next day. Two kids have never arrived in the same month. She is also the first girl to ever arrive at the Glade.  When they pull her out, she says something along the lines of “everything will change” and falls into a comatose state. Thomas soon becomes a Runner. The girl, Teresa, wakes up. When she wakes, Thomas and Teresa discover they possess the ability to communicate telepathically. Things change. The maze doors stop closing at night. The creatures — called Grievers — begin killing one boy each night. Thomas grows even more determined to discover the key to the Maze. To avoid “spoilers” I will stop my plot description here.

Even for a dystopian novel, the plot line was unrealistic. The “twist” at the end did not catch me by surprise; in fact, I would have been surprised if it had ended another way. The reason given for the creation of the maze did not feel adequate. There needed to be greater motivation to torture these poor boys! I needed a better explanation, a better causal effect. <SPOILER> A disease wiping up humanity was a big motivation. I’m not questioning the motivation. I’m questioning how torturing the Gladers to find “the smartest” moves humanity closer to a cure for said disease. Two years of running an impossible maze? Wouldn’t the disease have wiped out humanity by then? Isn’t there a better way of determining the smartest and fittest of the boys? </SPOILER>

The book did not “grab me” until at least 100 pages into it. When the novel finally “grabbed my attention,” it failed to keep me interested. Throughout the book, I felt bored and disconnected. The main character, Thomas, seemed to smart for his own britches. He solved problems the other boys hadn’t been able to solve for two years. I couldn’t relate to his character at all. He whined the first half of the book and became “superboy” during the second half. His sidekick Chuck was equally annoying. The only redeemable characters, I found, were Newt and Minho. Every time they entered into the narration, I felt myself enjoying the novel. When they left, however, I returned to my dismal state of annoyance. Perhaps I couldn’t relate to the characters because they didn’t know anything about themselves. If they don’t know who they are, how can I know who they are?

The boys, otherwise known as Gladers, have developed a “unique” language. The only real difference between Glader-talk and English is the usage of words like “shucking,” “shank,” and “klunk.” Some phrases have the words reverse; for example, “good idea that.” The developed “language” was rather annoying. Calling people “shuck-face” or finding scenarios “shucking annoying” isn’t a clever cover up of the f-word. Not a fan of the “shuck” language, but maybe that’s just me.

My roommate’s sister, who is a middle school student, also read The Maze Runner. The ending of the first novel pulled her into the second book The Scorch Trials. She attempted to convince me that the second novel justifies the first. I disagree. If the author cannot pull me into the first novel of his trilogy, how can he expect me to pick up the second or the third? The book wasn’t my cup of tea. If you enjoy reading about adolescent boys being put through horrors for the sake of experimentation, this is your novel. Have at it. However, I would recommend you go pick up The Hunger Games 0r The Giver and see what dystopian novels should be like.

Overall, I give the book 2/5 stars out of sheer generosity. I was curious enough to finish the novel but wanted to put it down multiple times.

One thought on “Everything Will Change: Thoughts on “The Maze Runner””