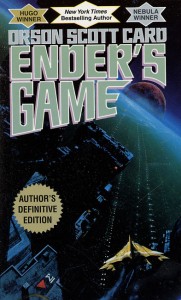 Ender’s Game by Orson Scott Card is a science fiction novel set in Earth’s future 70 years after a horrific alien invasion. Mankind barely escaped the first two alien invasions. In preparation for a possible third attack, the Earth has set up a military school in space to train child geniuses into future fleet commanders. All efforts are exercised in hopes of finding a military leader who will be Earth’s champion and achieve victory over the enemy.

The story follows the character of Ender Wiggin. At the start of the story, Ender is six years old. The Earth has enforced a two-child policy, but Ender is a “Third.” Ender is offered a place in Battle School and put through vigorous training. He is often isolated in order to reach his full potential. People in high authority believe Ender is mankind’s last hope against this alien race, otherwise known as the Buggers. Ender’s teachers constantly place more and more pressure on him. Every chapter is filled with the potential a mental breakdown. The risk seems great, but mankind’s future rests solely on Ender’s ability to cope with the various tests his teacher put him through. Sometimes the adult’s actions appear uncalled for and even malicious, yet their actions provoke empathy in the reader. The adults are stressed beyond comprehension. They believe in Ender; they love him. They continue to do what they do because they have to. They do not see any other way out. The reader feels Ender’s anger toward the teacher, but at the same time the reader understands the teachers’ motivations. Meanwhile, back on Earth, Ender’s older siblings are stirring up trouble. Ender’s psychopathic brother Peter is plotting world domination. Valentine, Ender’s sister, goes along with Peter’s plans.

The characters in Ender’s Game are unique and well developed. Card does an excellent job in engaging the reader. Ender wins the reader’s support in a heartbeat. We see the world through his eyes, feel his pain. Every character introduced into the story is engaging in his or her own way. Each character is unique and contributes to the development of the overall story. There are no throwaway characters. Card’s writing style is also engaging. I did not find myself bored with the story. Any frustration came with Ender’s frustration. When he felt defeated or bullied, I did as well. I wanted to keep reading, to see Ender overcome every situation thrown his direction. I absolutely loved Ender.

I’m not quite sure what the age group for reading Ender’s Game should be. The book does include some instances of cursing but not much. The book also deals with difficult topics such as racial issues and situations of war. However, the book also deals with the idea of being bullied and overcoming obstacles thrown at us. The book demonstrates how a child can be both childlike and adult, young and old, at the same time. The book struggles with the issue of what becomes “okay” in situations of war. How far is too far?

In my opinion, Ender’s Game is an excellent read. The text is engaging, the characters are thoroughly interesting, and the author has a purpose for writing. Overall, I give the book 5/5 stars.

It’s my kind of book.