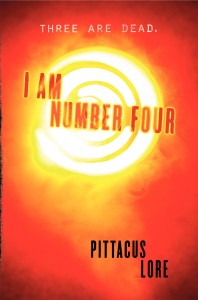 I Am Number Four by Pittacus Lore is an attempt at compelling young adult science fiction. The concept is great but the delivery “misses the mark.”  The story is told from the perspective of John Smith, a fifteen-year-old boy who is also an alien from the planet Lorien. John and his guardian, Henri, are on the run from another alien species called Mogadorians. The Mogardorians are responsible for the destruction of the planet Lorien. During the destruction, nine children escaped with their nine guardians. These escapees are now residing on Earth and are trying to remain hidden from the Mogardorians who are intent on destroying the last members of the Lorien species. A charm was placed over the children and the Mogardorians can only kill them in numerical order. The nine children are in the process of developing powers, called legacies, which will supposedly help them defeat the Mogardorians. They hope to eventually return to Lorien and repopulate the planet with these nine teenagers.

I found the characters flat and the plot completely predictable. Despite the lack of descriptive paragraphs, it does not take much imagination to picture the stereotypical jock-type Mark or the smart blonde ex-cheerleader Sarah. The hefty supply of “colorful” language scattered throughout the novel seemed both out of place and tasteless. The dominating “love-story” was cheesy. Three-fourths of the novel appeared to revolve around John and Sarah (whether they were kissing or John was telling his reader that Sarah is beautiful). In fact, we almost witnessed a sex-scene, which was timely interrupted by Henri’s return from the grocery store. The book did not seem to pick up pace-wise until the end. At that point, the battle scenes seemed cliche and unrealistic (even for a sci-fi novel). The battle scenes were narrated by John, who sporadically bounced between the opinions of “I’m done for” and “I can do this.” The conclusion also seemed abrupt and unrealistic. I kept thinking to myself, the author wrote himself into a wall, there is no way John and his friends can come out victorious. But somehow, John’s group makes it out alive (with only one casualty) and the Mogardorians temporarily disappear. Even the dog (who appeared to stop breathing and moving) survived. The novel left me asking questions of “how.” How is this possible? How did Sarah accept John’s alien story so easily? How did Sam? How did Mark? How do five kids and one adult (three of which are completely human) take out that many Mogardorians? How does number six survive with so many wounds? How does the dog survive? The novel left me with many questions, but not the good kind of questions; not questions of curiosity but believability.

While I realize the target audience is 12-15 year old kids, I Am Number Four still doesn’t measure up to my idea of a good read. Some moments caught my attention and some caused me to giggle, but those moments were few and far between. While reading, I didn’t care about the characters. One of my biggest pet peeves is not connecting with characters. Regardless of whether the character is a hero or villain, I want them to make me feel something-anger, joy, hatred, love. John Smith only made me feel delight when the novel was finally over.

Overall, I give this book 2/5 stars. I hope the movie is better.

One thought on “Thoughts on “I Am Number Four””