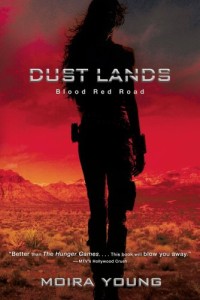 Blood Red Road by Moira Young is a Young Adult dystopian novel and the first book in the Dust Lands Trilogy. Saba lives with her father, her twin brother, and her younger sister at Silverlake, a desert wasteland where laws are nonexistent. Saba practically worships her older twin brother Lugh. He is the day to her night, the beauty to her ugly. She views Emmi, on the other hand, as the the thorn in her side. In some twisted way, Saba’s resentment toward her younger sister makes sense because their mother died while giving birth to Emmi. When four cloaked men show up at Silverlake and kidnap her brother, Saba vows to find him. She takes off in pursuit and leaves Emmi with Mercy, a friend of their deceased mother. During her quest to find Lugh, Saba reluctantly teams up with a cocky daredevil named Jack and a gang of female revolutionaries called the Free Hawks. Once separated from her twin brother, Saba is forced to look internally for direction and learns she is a fierce survivor and an unmatched opponent.

The book started out with three strikes against it—not fatal gramatical or literary errors but personal pet peeves. First strike, the book doesn’t use quotation marks around dialogue. Certain expectations exist within literary bounds. “Dialogue belongs in quotation marks,” says Christina. When dialogue is not put in quotations, says Christina, it can be extremely disorienting. Second strike, the book is narrated through heavy dialect. I don’t always mind dialect, but when the entire story is told through dialect, it’ll scare me off mighty quick. Third strike, no chapters. I almost hate to admit it, but I’m a goal oriented reader. I set small reading goals and read to the chapter marks. Blood Red Road is divided into sections based off settings. While not within those “certain expectations,” I will admit that these sections helped me track movements throughout the book.

Even with three strikes, I kept reading because my sister-in-law recommended the book, and I trust her opinion. I am SO glad I did!

Saba is one of the best female protagonists I have read in a while. She is rough, raw, and real. I wanted to simultaneously hug and strangle her at times. I laughed with her, I screamed at her, and I celebrated her victories. Jack is also one of the best male love interests I’ve read in a while. He didn’t coddle Saba or make excuses for her insecurities and imperfections. In fact, he called her out on her hard-headedness and stubbornness!  Their relationship developed realistically because they were real characters. While they possessed  many admirable qualities, they also had flaws and draw backs. The balance of good and bad qualities made them dynamic, round characters.

After the initial thirty-something pages, the dialect clicked, my mind tolerated the lack of quotation marks, and I contented myself to reading to the dots rather than finishing entire sections. I also realized the setup of the book was necessary to the story. Saba is uneducated and gritty. She tells the story from an equally uneducated and gritty perspective. The layout of the novel enhances her perspective. I think one of the reasons I fell in love with Saba is because I could imagine myself playing her character—this would be a dream role for the actor in me.

When I found out it was a trilogy, I was both excited and angry. On the one hand, more story to read—yay! On the other had, I knew I would be unsatisfied at the end of the book. Be warned readers. The third book is not yet published and will not be published until 2014. When I found out, I raged for a bit, and I wish to save you from raging. You’re welcome.

A well-written and addictive read, Blood Red Road drew me into the story and didn’t let go until the final page. And, honestly, the book still hasn’t let go. I still find myself mentally dipping back into the realm of this story. I loved this book! The brief moments of cheesy dialogue aren’t enough to knock off a star. I give it 5/5 stars. Go read it! Now!