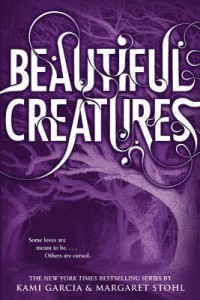 Beautiful Creatures is a Young Adult novel by Kami Garcia and Margaret Stohl and is the first novel in the Caster Chronicles book series. Ethan Wate lives in the small southern town of Gaitlin. Everything is as normal as could be until Lena Duchannes moves into town. The two teenager are inexplicably drawn to one another, and Ethan is determined to uncover this strange connection between them. As Lena and Ethan grow close to one another, their families seem determined to keep them apart. Lena slowly lets Ethan into her world. She is a caster, an immortal. Lena’s family is also cursed. While most casters have the freedom to decide their personal fates, in her family the casters do not have the luxury of free will. On her sixteenth birthday Lena will either be claimed for the light or dark. Ethan refuses to accept this limitation and the two strive to find a way for Lena to avoid destiny.

Honestly, Beautiful Creatures started out as a disorienting read for me. Although the movie and book are completely different stories, they have enough similarities to trick your mind into thinking you know what comes next. The similarities between the two ironically made the book somewhat confusing to read. At the same time, I enjoyed how the book widened the world created when I watched the movie adaptation. The movie did a brilliant job of condensing the book in order to create a fast-pasted and engaging screenplay. Movies do not have the luxury of time afforded to novels, so the movie used its allotted time wisely.

The book is written from a thoroughly engaging perspective. Ethan’s personality drew me into the pages of the book; however, his perspective did limit the story somewhat. I didn’t think Sarafine’s character had a big enough presence in the book. I don’t think the scene where Mrs. Lincoln tries to enter Ethan’s house with brownies would have made sense if I had not seen the movie. Other reviewers have criticized the “fast-paced relationship” that takes place between Ethan and Lena, but I didn’t think the relationship grew at an unrealistically fast pace. True, their lives seemed innately connected from the beginning, but I loved how this created a parallel between their lives and the lives of their ancestors. The connected stories demonstrated the desire to stop history from repeating itself. I loved the idea of telepathic communication between the Lena and Ethan. This ability made the progress of their relationship realistic.

The characters felt a bit flat at times. When you remove free will, characters become more like pawns than actual players. The dark caster seemed dark without conviction, coming off something like, “I’m evil because I’m evil, so deal with it.” The light casters seemed completely fine with outcasting the dark casters even though they became dark against their will. Again, choice has been removed from their family. Good guys are good. Bad guys are bad. Enough said. For this reason, many of the characters lacked conviction. I loved Ridley’s character because she had moments where she disliked her dark disposition. Still, at the end of the day, Ridley was a bad guy. Since Ethan and Lena both had their free will intact, they were extremely dynamic and enjoyable characters, but I wish some of their complexities bled into the other characters in the novel.

Side note: Amma contacts the spirit world in the novel through her ancestors. I didn’t like this, but it also wasn’t a major component of the story. The story sets these aside as Amma’s beliefs and Amma’s superstitions. The segregation between Ethan’s views and Amma’s views were clear throughout the story, so Amma’s character never dissuaded me from reading further.

Beautiful Creatures was an engaging read. I enjoyed the world created in the novel. If the characters had been a bit more complex, if the southern town hadn’t been as stereotypical, if Amma wasn’t constantly spelling words out, then my rating would be higher. I loved how the book had more characters and developed more relationships than the movie; however, I enjoyed some of the tweaks the movie made to the plot. I am excited to see where both the book story and the movie story go because I think both demonstrated great ideas and ended with potential for great possibilities.

Overall, I give the book 3/5 stars. I liked it, but I wasn’t “wowed” by it. I’m intrigued enough to pursue the series further and that’s always a good thing. I enjoyed the “Caster World” these authors created and will continue to explore it through the rest of the series.