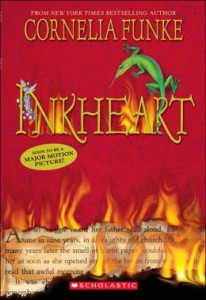 Inkheart is a young adult fantasy novel by Cornelia Funke and the first book in the Inkheart trilogy. The book tells the story of twelve-year old Meggie who lives with her father Mortimer, also called Mo and Silvertongue. When Mo is visited in the middle of the night by a strange visitor named Dustfinger, Meggie finds herself pulled into a world much like the worlds in the pages of her books. When Mo reads aloud, he has the ability to read characters and objects out of the book he is reading. When Meggie was little, he accidentally read a villain named Capricorn out of a story called Inkheart and  his wife Teresa into the story. Capricorn is intent on increasing his wealth and power by using Mo’s ability.

I wanted to like this book. I really did. The concept was intriguing and extremely though-provoking. A guy with the ability to read characters and objects out of stories? Sign me up, right?!

Maybe in the original language the book is different, but in this language, the book left much to be desired.

Overall, I give it 2/5 stars. Not reading the sequel.