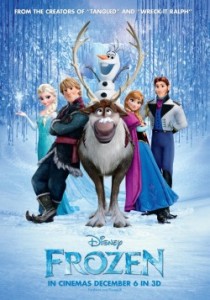 Frozen is Disney’s newest animated film starring Kristen Bell, Jonathan Groff, and Idina Menzel. After a rather icy turn of events at her coronation ball, Elsa flees the kingdom in order to protect those she loves. Anna, her fearless and adventurous sister, teams up with a mountain man name Kristoff to find Elsa and save the kingdom from an eternal winter.

Frozen is an instant animated classic—much like Tangled. The elements of the movie—the story, the music, the characters—were beautifully composed.

The musical numbers were phenomenal. Idina Menzel blew me away with her performance of “Let it Go,” and Kristen Bell rocked out “For the First Time” and “Do You Want to Build a Snowman?” The interactions between the characters were lovely, and Olaf’s character was fantastic comedic relief.

Overall, I give the movie 9/10 stars. The movie was definitely the best animated film of this past year and deserves high praise. The voice actors performed brilliantly both musically and vocally speaking. If you loved Tangled, then you will love Frozen!