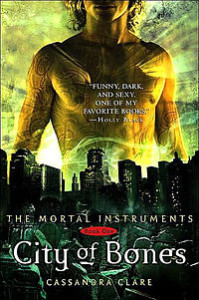 City of Bones is a young adult fantasy novel written by Cassandra Clare. The book is about a fantastical world hidden to the human or “mundane” eye, and a girl named Clary who suddenly gains the ability to see into said world. Clary is at a club with her best friend when she sees a couple of suspicious looking characters. She decides to follow them and witnesses a murder. When help comes, she realizes she is the only one who can see the killers.

I could say so many unfavorable things about City of Bones, but I will attempt to restrain myself and only highlight the main reasons why I wouldn’t recommend this book. Here are the top five reasons I would suggest skipping City of Bones:

The protagonist, Clary, is the daughter of a Shadowhunter raised in the mundane world, and she acts, well, sort of mundane. Although she feigns affection for other characters, her actions don’t back her words. She claims the three people she loves are her mother, Luke, and Simeon. However, she constantly seems to forget her mom while in the midst of parties and adventure and hot guys, she doesn’t want to give Luke a chance to explain himself (even though he’s always been there for her), and she always forgets Simon (always).

None of the characters seemed three dimensional and none “won me over” as a reader.

And I mean EVERYWHERE. I don’t mind a well-placed simile if it enhances an idea or image and has purpose. Clare’s similes were random, illogical, and nonsensical.

My favorite example: “Blood flew into the air like the spray of paint from a broken can, splattering the cement wall with red” (379).

In the middle of a battle, I don’t really want a long simile which fails to enhance meaning or make an image more powerful. The flow is ruined. Instead, I’m thinking about a broken can of spray paint and how the heck it would splatter paint against a cement wall. How about “Blood splattered the cement wall.” Easier to say and much more impacting.

I kept having dejavu moments from reading the same sentences over and over again. The same characters would say the same things to each other, forgetting they already had the same conversation on a previous page.

The repetition is not intentional.

Sexual content everywhere. One of the first things Simon says to get Clary’s attention in the book is “I wanted to tell you that lately I‘ve been cross-dressing. Also, I‘m sleeping with your mom. I thought you should know.”

Characters seem to flippantly talk about sleeping with each other throughout the book. I didn’t really see the point in the sexual content, but maybe that was just me.

5. You Must be an Idiot, so I will Treat you like One.

Unnecessary clarifications (like the explanation of what nausea means), constant showmanship (see what I did, reader? aren’t I clever?), grammatical errors such as unclear references (she watched him walk to the door as if paralyzed—who is paralyzed referring to? exactly my point), and she constantly describes the same characters over and over again—apparently Clary has nothing better to do than to constantly look at Jace’s beautiful blond hair, and the reader most definitely needs to be reminded of Jace’s blond hair.

I was constantly distracted by the terrible writing and annoying characters, and at no point did I ever feel completely immersed in the story. Honestly, it felt like reading an awful fan fiction with no sense of direction. I give it 1/5 stars.

Even though I hated The Maze Runner, at least the book drew me into the story at times. City of Bones never drew me in, so it was easy to let go. I will not be reading the rest of the series.