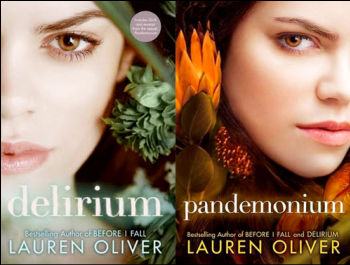 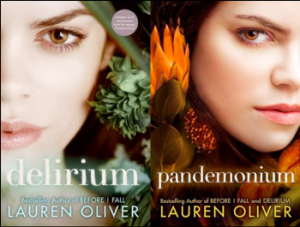 Pandemonium is the second book in a young adult dystopian trilogy series by Lauren Oliver. After finishing the novel, I immediately wanted to run to my computer and write this review; however, I restrained myself. I needed time to reflect and time for my emotions to settle.

I want to write this review without going into too much detail about the plot line and story. I feel even little revelations might ruin the read, and I definitely feel this should be read.

The series is based in a futuristic society where love is viewed as a disease. In the past, people believed love to be a good thing; however, now scientists have found the cure for love, otherwise known as deliria, and people understand the dangers of the disease. The government requires every citizen receive the cure upon turning eighteen. The cure cannot be administered before the age of eighteen because of certain risks involved in early administration. Lena Holoway is the main character of the novels. In Delirium, Lena is excited about the cure and cannot wait to live a life without love, a life without pain. Without fear of deliria a life will be safe, measured, predictable, and happy. However, ninety-five days before her treatment, Lena falls in love.

Oliver’s dystopian world  is more of a backdrop for her stories than a fully created world. The characters, specifically Lena, are the main focus. After reading Delirium, I was somewhat pleased. The book was an “okay” read with an “okay” story. I didn’t hate it, but I didn’t love it either. Delirium is a love story. When you place your characters in a society where love is viewed as a disease, you’re bound to end up with a love story. I’m okay with that concept. For me, the most satisfactory part of Delirium was the ending–not the fact that the book ended but the ending itself. If the book hadn’t ended the way it did, I would not have been pleased with the book. Sadly, I can’t say anything else about it without ruining the book, and I will not ruin this book for you!

Surprisingly, I loved Pandemonium way more than Delirium. While Delirium kept me intrigued, Pandemonium had me on edge. I needed to know what happened next. The narration is well written, and Lena, as a character, improves drastically. I became more attached to Lena in the second novel; I rooted for her more. In retrospect, this makes perfect sense. Lena is more likable in the second novel because her character develops. I love it when characters grow!

Pandemonium does not have traditional chapters. Lauren Oliver does a “now” versus “then” setup. The chapters dance between past and future until meeting at one moment in time. At first, the dance seems awkward, but as soon as you learn the steps, it’s easy to become lost in the story, in the music of Oliver’s words.

If I had to define Pandemonium in three words, I would describe it as an “ode to grief.” The book discusses the idea of moving on, of growing stronger despite countless setbacks. In a sense, it tells the story of growing stronger without hardening oneself completely. My emotional distraught came with finishing the novel. Pandemonium ends with a horrid cliff hanger.  When I finished, I threw my book against the couch, and it bounced right back into my hand. I threw it again, yelling quite loudly and angrily. I repeated this until I finally flung it straight across the couch, out of reach, and stared at the book. Torture. I kept thinking about the ending for the next few hours in a daze with tears watering my eyes.

Requiem  is the third and last novel of the trilogy and hits stands Spring 2013. To learn more about Lauren Oliver and her books, visit her website.

I would give Delirium 3/5 stars and Pandemonium 4/5 stars. The book is well written, interesting, and enjoyable. A fantastic summer read.