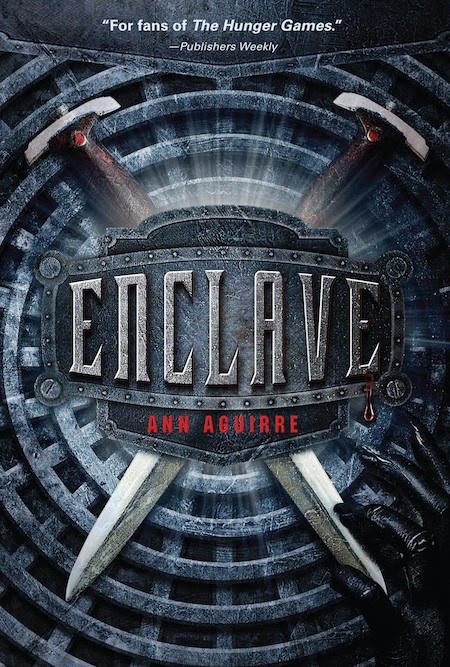 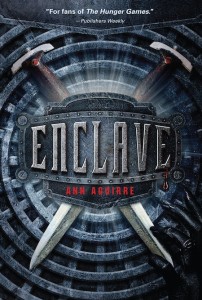 Enclave by Ann Aguirre is a Young Adult post-apocalyptic dystopian novel set in New York. The main character is a female named Deuce who is a Huntress in an underground enclave.When a “brat” turns fifteen, they take on one of three jobs: Hunter, Breeder, or Builder. Deuce becomes a Huntress whose purpose is to protect the enclave from zombie-like creatures called “Freaks” or “Eaters.” She is paired with a misfit named Fade who joined the enclave later in life rather than being born into it. As hunting partners, the two grow closer and learn more about one another. They also learn that the Freaks are growing smarter and have already destroyed another enclave. The enclave itself is run strictly by rules. Deviation from the rules is severely punished. As the novel progresses, Deuce’s views on the rules governing her enclave change. She no longer sees the rules as protective but as a way of taking advantage of the enclave’s inhabitants.

Enclave was a fairly interesting read. The book told a story of survival with no real plot besides surviving. My final opinion of Enclave is mixed. Part of me enjoyed the novel and part of me did not. The first half of the novel intrigued me. I wondered how the secret society would go about overthrowing the leadership of the enclave. I wanted to see the corruption called out and a fight instigated. However, for reasons I will not reveal, this doesn’t happen which highly disappointed me. The second half of the novel seemed like a completely different story than the first, and it was the second half of the novel I had the most trouble with. The second half didn’t seem to fit with the first. The characters changed drastically. The new characters seemed thrown into the writing solely to keep Deuce and Fade from being alone. The second half drug on and on with no real purpose.

The writing was good, and the structure of the book impressed me, but overall I felt cheated by reading this novel. My main problem was that I did not find a purpose for the novel. After reading the book, I didn’t understand why I read it. The book didn’t add to my life in any way. The story line wasn’t unique enough to stand on its own. No seed of wisdom was planted in my mind. Overall, the novel faded into the background, drowned out by so many other good books I’ve read. The novel was okay. It wasn’t great and it wasn’t horrible–it just was and that’s not okay to me.

I would give Enclave 2.5/5 stars. I’m neutral on this one. Maybe the second book Outpost will shed some light on why the first book existed. That is, if I still remember this book by the time September 2012 rolls around.