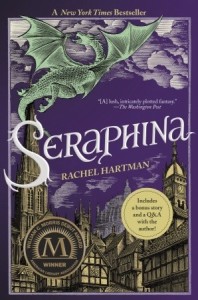 Seraphina is young adult fantasy novel by Rachel Hartman. Set in the world of Goredd and follows the story of sixteen year old Seraphina—a girl with an unusual heritage. When the crowned prince of Gored, Rufus, is murdered by decapitation—a dragon method of killing—four decades of peace between dragons and humans is threatened. With a foot in both worlds, Seraphina is pulled into investigating Rufus’ death alongside the annoyingly observant bastard prince Lucian Kiggs. As they come closer to discovering the truth, Seraphina struggles to protect her own secrets, the revelation of which could mean losing her life.

Seraphina is a finely crafted piece of literature and includes all the elements necessary for an outstanding work. The world building is incredible and the idea is fascinating. The inner workings of the Goredd kingdom were so intricate it felt, at times, like I was reading a political novel. The plot, however, failed to impress. Also, the pacing of the novel seemed disjointed, as if a person used to driving an automatic was attempting to drive a stick shift for the first time. Not a deal breaker when it comes to novel reading but still somewhat unsettling.

The ending was frustrating. I am not a fan of leading people on and toying with their emotions. Stringing people along for appearance sake bothers me. Period. The situation created a love triangle—albeit, an awkward love triangle where one character does not realize she is in one! Goodness.

Again, the writing is top-notch and the perspective is unique. I definitely plan on reading the next book when it is released; however, I felt like the book was missing something. I’m just not sure I can pinpoint exactly what it was missing.

Overall, I give the book 4/5 stars. I’ve read my share of fantasy novels, and Seraphina just didn’t “do it” for me.