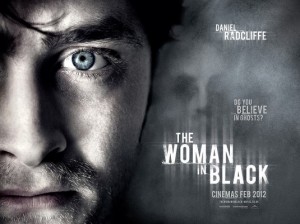 Daniel Radcliffe) who is sent to a remote village to close the affairs of a house. The house belongs to the recently deceased woman in black who we soon discovered is a vengeful ghost terrorizing the town. Through his grief, Arthur has worked his way into a tricky situation with his company. He needs to do a decent job on this property in order to keep his job and support both himself and his son. As the citizens attempt to run him out of town, Arthur grows more determined to fully investigate the house. When he does, bad things start happened. For more information on the film click here. To view the trailer click here.

Before I start into a review on The Woman in Black, I would like to make a few things evident. I am not a fan of horror movies. In fact, I typically avoid them at all costs. However, there have been a few occasions where a particular movie intrigues me, despite its promise of terror. When Disturbia made its appearance in theaters, it looked terrifying. Still, I decided I wanted to see it it. I ended up thoroughly enjoying the movie and added it to my collection. The Woman in Black sparked this same intrigue within me.

I wanted to see The Woman in Black for two main reasons. Firstly, this is Daniel Radcliffe’s first movie apart from the Harry Potter Series. I wanted to see if he could act outside of those films. In other words, I wanted to see if he could “cut it” as an actor. Secondly, the movie is based off a 1983 horror fiction novel by Susan Hill. I’m always curious to see a movie’s depiction of a novel. Also, my mind tends to wreak more havoc within the setting of a novel than in the aftermath of movies. If I wanted to experience this story, I figured the movie would be the better medium. So I grabbed my friend Josiah and we embarked on the terrifying journey together.

Overall, the movie was well done. The acting was excellent. Visually, the movie was beautiful. The story line was compelling.  However, the movie itself was absolutely terrifying. I would divide the movie into two parts. The first part is comprised of expected “jump” situations. The second is absolute terror.

The movie begins with three girls playing with a tea set and dolls in the attic of their house. Suddenly, the girls put down their dolls and walk over to three windows, open them simultaneously, and leap to their deaths.  At this point, I couldn’t help but wonder what I had gotten myself into. The next scenes include Arthur  and his wife. We experience happy scenes of their wedding, but soon understand Arthur’s wife is deceased. He travels to the town to read through the paper work kept in the house in order to accurately close its affairs and sell it. However, Arthur soon discovers the house is haunted.

As the story unfolds, we begin to understand the rage experienced by the woman in black. Her son was forcefully taken from her and given to her sister and her sister’s husband. Arthur discovers angry letters, demanding she be allowed to see her son, calling the sister an unfit mother. In light of the tragic death of her son (he drowns in the marsh), the woman in black accuses them of allowing her son to die. They never recovered the boy’s body, never gave him a proper burial. The woman in black is one ticked off woman. She causes children of the village to kill themselves. I came to a discovery regarding the children’s deaths. Each time the woman in black kills a child, the child has been left unattended; their parents are not properly caring for them. Through the children’s deaths, she is attempting to wake up the parents. In some twisted way, she is attempting to save the children. As Arthur digs further and further into the secret of the woman in black, more and more terrifying events ensue. Trust me, the woman is terrifying, her scream haunting.

The movie leans more toward ghost activity than demonic activity. One character in the movie, a woman who has lost her son, believes her son is speaking through her. Her character was more than slightly disturbing. The movie contains zombie type activity. When Arthur opens the door to the rainy night, he is confronted with the undead bodies of the children killed by the woman in black. He stumbles back inside, determined to face the woman rather than the children.

Miraculously, Arthur survives his night of terror. Back in town, he decides to help appease the woman in black and stop the death of the children. Returning that night with his friend, he attaches a rope to the motorized car and dives into the marsh. Pulling up the wagon, he recovers the body. He reunites the dead body of the boy with the mother, and then buries the boy in the mother’s coffin. Then he returns to the station in order to meet his son and his son’s caretaker. He tells them there is a change of plans, they are leaving the town immediately.

The audience breathes a sigh of relief, the movie is over. Not exactly. While Arthur is talking to his friend, Arthur’s son pulls his hand from his father and jumps down onto the tracks. He begins walking toward the oncoming train. We see the woman in black at the station. Arthur leaps onto the tracks in order to save his son. When the train passes, Arthur’s friend peeks onto the tracks. We see Arthur and his son, Arthur’s back still turned toward the train. The audience breathes another sigh. He saved his son. Not exactly. Arthur and his son have a ghost-like appearance. Soon we realize both are dead. An unexpected turn of events.

The surrounding audience exclaimed at this ending. The most common reaction? “What just happened?” The boy asks his father about the woman behind them. Arthur turns. Expecting to see the woman in black, the film surprises us with the image of his dead wife. They walk toward her and join hands, walking into the light. Ten seconds after the movie ended, I came to another realization. Because Arthur reunited the woman with her son, she reunited him with his wife. A completed family for a completed family. In some twisted way, she was returning the favor.

I’m not completely sure where my thoughts on this movie lie. At first, the movie appeared to condemn such activities as speaking with the dead. A person needs to move on from grief and not dwell on the deceased, especially not attempt to contact them. In the end, the movie seemed to advocate some sense of in-between spirituality. The movie was not excluding the existence of a spiritual world; however, the movie did not correlate with the Christian sense of spirituality. Since Arthur and his son die at the end in order to be reunited with the mother, it seems the movie’s message was telling the viewer one cannot be happy after a loved one dies. Healing only comes in death. In a sense, true healing only comes in death, when the soul is reunited with the creator. However, through hope in Christ, one is able to move on after death. I would need to watch the movie again to fully determine the message behind it. Honestly, that’s probably not going to happen.

The movie was a solid production, and I am quite excited for Daniel Radcliffe’s acting career. If you can’t handle horror films, stay away from this one. Friends who frequent horror films, agreed that this was a terrifying movie. If you find yourself feeling brave, you might watch it once through. Daniel Radcliffe holds is own as the lead of this movie, demonstrating a wide range of emotion. Glad I saw it, but I don’t want to see it again!